The natural phenomena that could cause climate change.

Scientists do not think global warming is a myth but have examined the issue seriously. – Scientific American

What are the greenhouse gas changes since the Industrial Revolution? American Chemical Society.

Data for the past 2000 years show that the atmospheric concentrations of CO2, CH4, and N2O – three important long-lived greenhouse gases – have increased substantially since about 1750. Rates of increase in levels of these gases are dramatic. CO2, for instance, never increased more than 30 ppm during any previous 1,000-year period in this record but has already risen by 30 ppm in the past two decades.

These increases in greenhouse gas concentrations and their marked rate of change are largely attributable to human activities since the Industrial Revolution (1800). 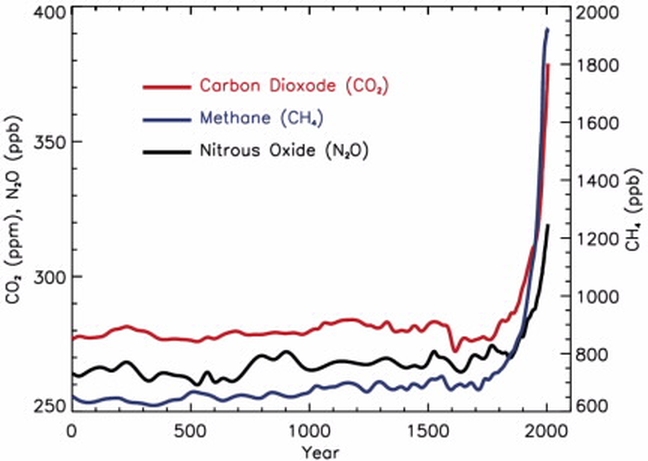 Climate Change, How Do We Know – NASA

The current warming trend is of particular significance because most of it is extremely likely (greater than 95 percent probability) to be the result of human activity since the mid-20th century and proceeding at a rate that is unprecedented over decades to millennia.

Greenhouse gas highest since the Pliocene, when sea levels were higher and the Earth was warmer.

An instrument near the summit of Mauna Loa in Hawaii has recorded a long-awaited climate milestone: the amount of carbon dioxide in the atmosphere there has exceeded 400 parts per million (ppm) for the first time in 55 years of measurement—and probably more than 3 million years of Earth history.

A Blanket Around the Earth – NASA

On the graph above, the y-axis plots the length of the glaciers relative to their length in 1950 — so this is a kind of length anomaly. A positive number means that on average, glaciers were longer than they were in 1950; negative numbers mean they were shorter. Here, we can see that beginning around 1850, glaciers around the world begin to shrink, and this trend continues to the present. The average glacier has retreated almost 2 kilometers in this time.

It is possible to estimate the magnitude and history of temperature change needed to produce this history of glacial retreat, and Oerlemans (2005) did this using a simple model; the results are shown below.

The Sahara has expanded 10% from Science Daily.

The tropics are enlarging from Yale.